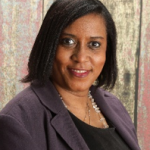 We are saddened by the sudden loss of our friend and colleague Janet O. Hicks, on August 13, 2018. From September 2016 to the time of her death, Janet was the Accounting Managerial Assistant for the Association of Inspectors General. She was a diligent, hard worker. In addition to working for the AIG, Janet was also a Graduate student at John Jay College of Criminal Justice and was working toward a Master’s Degree in Public Administration – Inspection and Oversight.

We will certainly miss Janet.  Our thoughts and prayers go out to Janet’s husband, Jeffrey and their son, Thomas.